There are no framed Premiership medallions adorning the walls, nor shiny championship trophies to commemorate the prodigious sporting feats of Patrick James Flynn.

His could succinctly be described as a ‘solid’ career, notable for the enthusiasm he was able to engender as a footballer/ tennis player, and the great loyalty he displayed.

His football lineage was impeccable. Paternal grandfather Jim Flynn was a famous Carlton captain, who led the Blues to successive flags in 1906-’07 and added another to his collection the following year. Four of his maternal great-uncles, the Hiskins boys, were League stars of the early 20th century.

In racing vernacular, with a pedigree like that, bloodstock agents would have clambered over each other to syndicate him if he was an unbroken colt.

His playing stint as a footballer, enjoyable as it was, consisted of 270-odd games with Moyhu, the club to which he still retains a strong affiliation, and to whom he was connected for 16 years, from 1963 to 1978.

They say he was the Hoppers’ greatest recruiter. No stranger who looked capable of kicking a footy, would leave the Menswear shop without being asked the inevitable question : “Don’t suppose you’d be interested in a game? ”

Pat’s love of tennis was inherited from his mum, Nora, who, with three other sisters honed her game on the bitumen surfaces of Peechelba/Boorhaman/Bundalong and learned to manoeuvre players around the court with deft skills.

Like so many of his era, he grew up being consumed by the wholesomeness of sport – the joy of competing strongly, then debating and laughing about the day’s events over a frothy ale in the gathering dusk.

One of his first acts, when his parents re-settled in town in 1960, after many years at Seymour, was to race down to the courts and find himself a game of tennis. Fifty-five years later, he’s still playing – having a hit on Wednesday night with some old mates and, of course, saddling up each Saturday for the regular competition.

I asked Steve Norman, who once shared a WLTC Doubles title with Pat, to give his opinion of him as a player: “Determined, never beaten, and a terrific bloke to play with, ” was his summation.

And, I dare say, his team-mates at Moyhu would agree they were his footy attributes.

There is something exotic about the surrounds of Merriwa Park, which has been the home of the Lawn Tennis Club since 1925. As once described, it’s a natural amphitheatre in a superb setting, a perfect spot to spend a fair bit of your life.

Pat has ridden the highs and lows. From savouring the enjoyment of long, hazy days competing in the upper sections and relaxing under the shady trees surrounding the 24 courts, along with the rest of his family…. To watching helplessly as the overflow of the King River slowly inundates the courts and creeps into the club-house…. Then the hours and hours of work required in bringing everything back to normal.

Or playing a major role in running the club’s major event – the annual ANA tournament…. Or making decisions on the many improvements that have been made to the courts and surrounds over the years.

If you asked him what his biggest sporting thrill has been, he would probably nominate the Mixed Doubles championship he won with daughter Mandy five years ago.

Pat is no different to hundreds of other people involved in sporting organisations – selfless individuals who have long ago repaid their dues to sport and think nothing of putting up their hand to ensure that their particular club remains on the right footing.

He gravitated to the Presidency of the WLTC in 1980 and held the reins until 2000. It wasn’t that he had a thirst for power; just that his first-class ability to relate to people made him a natural.

He’s a walking encyclopedia on the great players who have graced the lawn courts over the years. He has been to Country Week with most of them. It’s a week that he savours (he will be heading off on his 51st trip next month) and he enjoys meeting up,with the old stalwarts of other towns, who always seek him out for a bit of a yarn.

He was awarded a Life Membership at Moyhu Footy Club (he also received the same gong at the Tennis Club), but when the Rovers ran into a bit of financial trouble in 1997, he agreed to help out and was drafted onto the Board.

It was an awkward time for the Hawks and they had to be prudent whilst still remaining competitive. They were able to eventually eradicate their considerable debt and within five years were playing in a Grand Final, with a predominantly local group.

Pat assumed the role of Chairman and, for 10 years, threw everything into it. He kept abreast of all that was happening in the Club, and was able to soothe any potential disasters with his diplomatic skills.

A pat-on-the-back to the person manning the hot-dog stall, the people cleaning the rooms or doing the maintainence around the ground, manning the gates or filling the fridges, was important, as he reckoned they played as big a role in the Club as the players.

Again, it was a Flynn family affair at the Rovers. Wife Di received her Life Membership a couple of years ago, for her unstinting service in the Kiosk over many years. Oldest son Paul played 221 games ( 25 Senior, 154 Reserves, 42 Thirds) and is also a Life Member.

To Pat’s eternal disappointment, Shane, a languid, long-striding, tall left-footer and key defender , showed great promise and put together 48 senior games over six years, before a third knee re-construction after the 2002 Grand Final, finally put paid to his playing career.

Daughters Mandy and Kellie were members of the Rovers original, successful, netball teams and son-in-law Matt Allen, is, of course, one of the Hawks’ finest – the Club record-holder with 362 senior games ( plus 47 Reserves and 17 Thirds matches).

Although not having an official role in 2015, after 18 years as a Board member, he will still be seen around the place, just as he is at the Tennis Club, because he is a readily identifiable figure of both organisations.

Now he is looking forward to ‘having a ringside seat’, as the three eldest of his ten grand-kids, Georgia, Sam and Joe Allen, are beginning to show a bit of talent on the tennis-court.

Georgia is continuing the Flynn/Hawk tradition, as she’ll be playing in the Under 16 Netball team this season.

And  I’m betting that the boys, who have grown up around the Findlay Oval, will be a shoe-in to become senior players within the next decade.

If so, their Pa will be enthusiastically riding every kick and bump and offering plenty of encouragement . There’s no room for negativity in the sporting doctrine of Pat Flynn. 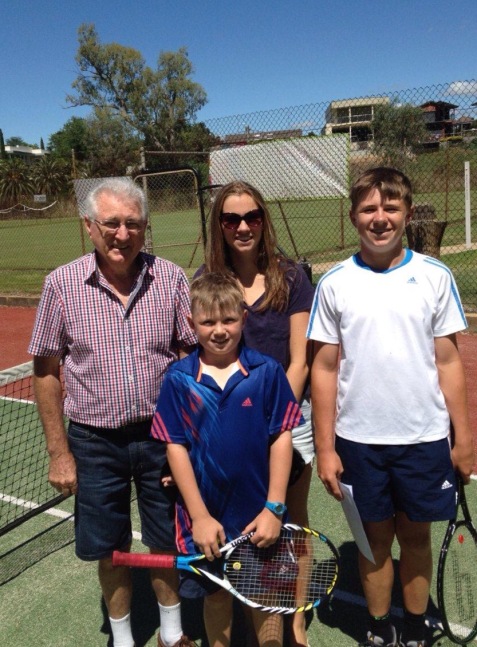