He’s a jolly fellah, Wal. But if his smile could get any broader, it happened on a hot January evening in 1995, when he stormed home to win the Wangaratta Gift.

The sentimental favourite had scorched down the floodlit 120 metre track, to breast the tape in 12.21 seconds, and ignite wild celebrations. Hands held aloft, he commenced probably the longest celebratory journey in Gift history, and finished his ‘lap of honour’ by acknowledging the roar of the crowd in the Richardson Stand.

He still rates it as his finest sporting moment, even though he can entertain you with scores of other anecdotes and highlights of an eventful career which has hummed along for nigh-on 30 years……..

He was brought up on the family’s King Valley tobacco farm, one of three sport-mad kids. An older brother, Anthony, had fulfilled a long-held dream to come in and play footy with the Wang Rovers, where his name was to become indelibly etched into the club’s record books.

Wal was eager to follow suit and in 1985 featured in a Thirds’ premiership, alongside players of the calibre of Mick Wilson,  Howard Yelland and Rick Marklew.

His progress was steady. A lengthy apprenticeship in the Reserves included a Runner-up Best & Fairest trophy in 1987 and universal recognition as a terrific clubman.

A smaller edition of the lean, versatile ‘Pas’, he was mainly a winger, with pace to burn and a lethal left boot and was rewarded with 3 senior games in 1987, Laurie Burt’s first year of coaching.

“Wal’s bubbly personality helped create a positive vibe around the club. Everyone loved him.” Burt said.

“But I wasn’t in his good books one Thursday night when I announced the side and left him out. The next thing we heard was a loud bang. Wal had taken his frustrations out on the toilet door. I pointed out to the boys, that’s how much it means to him to play senior footy.”

It was on the suggestion of a team-mate, Nick Goodear, that Wal decided to have a crack at foot-running. The extra edge in pace would, he believed, be the weapon that would earn him a permanent senior spot.

But disaster struck, in the guise of a damaged knee early in the 1988 season, which required a full reconstruction and effectively put the kibosh on a footy career which was really only just starting to crank up.

And, as his rehab progressed, so did the thoughts that he might focus on running. He was working as an electrical sub-contractor at the time, doing plenty of training under wise old Bernie Grealy and finding an adrenalin-rush in his adopted sport.

Within eighteen months he was lining up in the final of the illustrious Stawell Gift, on Easter Monday, 1990. It was to be the year of the brilliant West Australian Dean Capobianco, who blitzed a field which included two other eventual ‘Stawell’ winners.

Nerves got to Wal, who finished sixth . But he was richer for the experience.

For the next five years or so he was super-competitive, despite running off a tight mark. Always explosive off the blocks, he won successive Broadford Gifts, and took out the 70m events at Werribee, Bendigo and Broadford (twice).

During a big 1993 campaign, he finished fourth in the coveted Bendigo 1000, and was invited to contest Jupiter’s Gift in Queensland, where he ran a close second. He was fourth in the final of Adelaide’s rich Bay Sheffield Gift, regarded as second only to Stawell on the pro running calendar.

To top the season off, he took out the time-honoured Burramine Gift. So, with those sort of performances, there was little wonder that the handicapper was always scrutinising him closely.

He was flying in early 1995 and began to focus on the Wang Carnival even more intensely after his win in the Rye Gift two weeks prior.

“It meant a lot to me to run well at Wang, in front of my home crowd.  Mum and Dad, who didn’t usually attend the Carnival, were there, all my mates were egging me on and I felt good in the lead-up to the Final,” he recalled.

So how did it feel, Wal, when the ground lights were turned off, the floodlights were trained on the Gift track and commentator Eddie Bush gave your resume’ as you paraded down that familiar stretch of turf, just minutes before the big event ?

“I was pretty sure I’d do OK. It was all about getting away to a good start, which I did, and I was determined to catch the front-marker, Adrian Campagna, who was another local, by the 60-metre mark, then peg back the other blokes in front of me.”

” I’ve never run faster than I did that night and when I got to Phil Harloff, the Albury runner, I knew I was home. There was about a metre in it in at the finish. And then the celebrations started……..”

Wally started to experience trouble with his achilles the following season and it became a continual battle to get his body right.

But he kept running and his love of training and competing remained as strong as ever.

One ritual he maintained was his journey to Stawell every Easter. It was there that his romance with a star 400m runner, physiotherapist and his future wife, Anna Deery, blossomed.

Anna had been close to Australian selection as a junior, restricted only by a navicular foot injury. She was later in contention for a spot in the 400 relay squad for the Commonwealth Games, being rated No.5 in the squad and narrowly missing a spot.

So, with a mutual love of athletics, they had plenty to offer Wangaratta sport when they moved back here in 2009.

Wal re-ignited his considerable passion for the Brown and Gold and has helped out in several capacities. Of particular assistance has been his work in fitness and conditioning. He is held in high regard by the Hawk playing group.

Greg O’Keeffe, who has seen all of the top local runners come and go over the years, rates Anna as one of the hardest female trainers he has seen. She has a zest for junior development and is heavily involved with Little Aths.

Their contribution to the Athletic Club has increased by the year, both by sponsorship through their Optus business and their considerable physical input.

The whole Pasquali brood – Wal, Anna and the kids, Christian, Isabella and Sofia – will be competing this Saturday, when the Carnival kicks off.

And Wal will be forgiven a touch of nostalgia when the finalists are asked to take their marks for the running of the 95th Wangaratta Gift…..It’s 20 years ago, the butterflies are in the tummy and he’s the second back-marker… Oh,what a memory that is………. 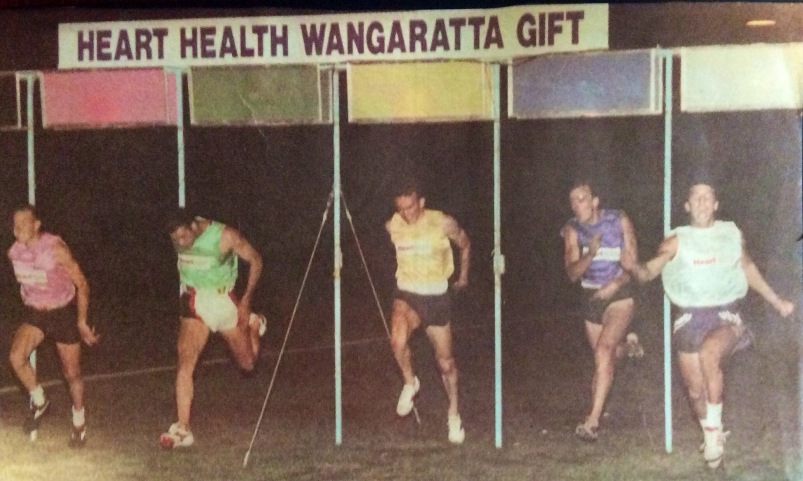 3 thoughts on “SENTIMENTAL FAVOURITE GETS THE CHOCOLATES…”