I’d like to escort you back through the ages – almost 130 years, in fact – to a tiny farm near Lake Moodemere, on the outskirts of the busy, booming gold-rush town of Rutherglen.

Irish emigrant Dan King is yarning with his friend Jack Hiskins about a new game that was being spoken of by visiting bullock-wagon drivers. It had, they were told, become very popular in Melbourne and all the young fellows were aspiring to join clubs that had sprouted up in the city and surrounds.

“Let’s have a bit of a look at it”, King said to his mate. Dan had been brought up on Gaelic football ; Jack knew a fair bit about the British game of Rugby. This new code was apparently a mix of the two sports…..

Dan King, a bootmaker, roughly fashioned a football. The cover was made of leather and kept in shape by an inflated pig’s bladder.

Soon the seven King boys and all of the Hiskins clan had mastered the art of kicking and marking. So much so that they were to become the backbone of the fine teams that represented Rutherglen and it’s surrounds for the next couple of decades.

The ‘Glen chalked up flag after flag in an era of dominance in the Ovens & Murray League in its fledgling days. Bernard King was seconded to coach the side and his brothers Jack, Jim, Pat, Chris and Francis were some of the stars.

Jack and Jim both played League football and Jack was to return and play with the Redlegs for a staggering 26 years.

Jack Hiskins had 14 kids and the nine boys all played in the O & M, which is a record that will, in all likelihood, never be broken.

But they spread their favours between two teams in the district – Rutherglen and Lake Rovers. Clashes between the arch rivals incited plenty of feeling, particularly in the Hiskins household, where brothers would, at times, line up on each other.

Fred was the first of the family to be enticed to the ‘big smoke’, when he joined Essendon in 1900. A fine half forward, he topped the League goalkicking the following season, with 34, but occasionally had a bout of the ‘yips’ . There was one ‘shocker’ against South Melbourne, when his favoured place-kick let him down and he finished the day with 2.10.

He represented Victoria in 1902 and disappointed Essendon at season’s end by walking out and seeking his fortune on the gold-mines of Kalgoorlie, where he spent three fruitful years with Mines Rovers.

Fred sustained a nasty eye injury at work and headed back east to receive treatment. Essendon pounced, upon his return, and placed him at the goal-front. 1906 was to be his swansong season of League football and, after 50 games and 78 goals, he chose to play out his career at Rutherglen.

Arthur found his way to South Melbourne in 1908 and was to play a prominent part in the ‘Bloods two–point premiership win over Carlton the following year.

Nicknamed ‘Poddy’, he usually lined up on a half back flank and was renowned

for his long-kicking and tenacity, despite being only 178cm.

He enlisted in 1916, aged 30, having played what, one would have thought, was his last game, as he headed to the front-line in France.

A photo on the Australian War Memorial website, shows Arthur standing knee-deep in mud, in Belgium in 1919. He was a world away from the game that he loved with a passion. Seven months after the photo was taken, he ran onto Princes Park Oval, in his return to League ranks.

He was appointed playing-coach of South in 1920, but they slipped out of the four and he was relieved of the job. However, he played on until the end of 1923 and finished what had been an outstanding career, with 185 games.

He then officiated in 52 games as a VFL goal-umpire.

‘Poddy’ enticed another brother, Stan, to come down and have a run with South in 1913. Stan was of similar build and was a versatile player, who spent a lot of time in defence. He possessed ample doses of the trait which ran through the Hiskins family – toughness.

Stan was a back flanker, but had proved a reliable goal-kicker in his forays up forward. Three months after he had played in the 1914 Grand Final – his 30th game – he was heading off to France, as part of the frontline.

He lost four years of his career to the war, but returned to his occupation as a carpenter and was selected in South’s side for the opening round fixture of 1919.

Carlton scouts headed up to Rutherglen in pursuit of Neil Hiskins. Considering that three of his brothers had already made their mark on League football, they were excited by reports that the solidly-built Neil was the pick of the crop.

They found the boys having a kick in the paddock, near the family’s watermelon patch. But the youngster was having none of the suggestion that he join the Navy Blues. “No, I’m quite happy here”, was his response.

Neil was a star with Rutherglen but never ventured past ‘Pretty Sally’. Nevertheless, his older brother Rupert agreed to give it a go.

But before he had the opportunity to play a senior game, Rupe enlisted and joined the Light Horse Brigade. By October of 1916 he was in the Middle East, where he was trained as a machine-gunner.

He contracted skin infections, which saw him regularly in hospital throughout his military service. The problem only cleared up when he returned home in 1919.

Rupe then began a superb League career. Although he was 26 years-old he made an immediate impression as a free-running six foot-plus defender.

He was soon thrust into the ruck and formed a lethal combination with established stars, Bert Boromeo and Lyle Downes. He was an extrovert and a big-occasion player, who revelled in the finals atmosphere. Besides his long kicking and ability to do the heavy work, he was agile at ground level.

Rupe was a six-time Victorian representative and had become one of the game’s big names. By 1923, however, he was asked to carry the ruck division. Downes collapsed and died after training one night and Boromeo had controversially exited the club.

Rupe retired in 1924 after 74 games and joined Boromeo at VFA club, Brunswick, where he concluded his career with a flag.

The other brothers in the prolific family, Jimmy, Vic, Bert and Clem gave yeoman service to Rutherglen and Lake Rovers.

A veritable assembly-line of Hiskins progeny has continued through the generations….

But to catalogue the rest, who became stars ( and champions) in Ovens & Murray ranks, and beyond, would be a decent yarn in itself.

Young  defender James Smith is the latest product of this football dynasty that was created by his great-great-great grandfather all those years ago, on a dry, dusty little property at Lake Moodemere. 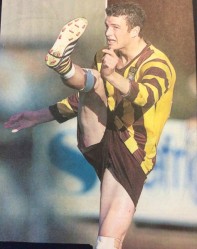 2 thoughts on “A FOOTBALL DYNASTY”