One of my boyhood dreams was to be a sporting nomad…….shuffling between towns, finding a job, playing a season of footy and cricket here and there, meeting a new set of mates , then moving on……

A sort of : “Have bat and footy boots / will travel “, existence, I mused.

It worked well for a while – until homesickness set in……

But I had a yarn to a bloke the other day who certainly didn’t let the pull of home deter him from his youthful wanderings. They lasted 14 years and included stints with 10 football clubs. Finally, with a growing family he decided to put down his roots in Wangaratta.

But even then, the career of Jack Gannon, one of sport’s most durable all-rounders was still gathering momentum……..

When I mention the name ‘Jack Gannon’, you probably invoke thoughts of the long-time Glazier ferrying around town in his white Toyota Hi-Ace……You probably recall the earnest, veteran runner, straining valiantly for the line in a distance event at the local Carnival…..

Or the wisened old football identity, answering the call of an O & K club to take over their coaching job…….

Some of you may be able to hark back to the classy, speedy, lean utility player who was at the helm of two Ovens and Murray clubs during the eighties…….

But only the most observant will attest to the fast bowler with the fluent action who fired out a Pakistani batsman with 10 Test centuries to his name, in an international match…

A native of Corryong, his parents moved to Albury when they sold the family farm. Jack’s first club was Lavington (pre-O & M days), who won the Tallangatta League seniors and Reserves premierships whilst he was with them.

He headed down to Benalla at the end of one school year to holiday on his uncle’s farm and ended up getting a job and staying for three years. In the first two, and still in his teens, he played in flags with Tatong.

” Ken Roberts, who was my opening bowling partner at Winton-Molyullah, was the footy coach of Benalla at the time. He invited me to have a run with the Demons. It was my first taste of major-league football and I loved the season I played there, ” Jack recalled.

Then it was back to A 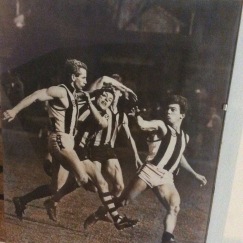 lbury, where he was snapped up by the Tigers. He fitted nicely into one of the O & M’s stronger sides and played mainly on a wing, where he earned inter-league selection against the South-West League.

Jack made some pretty good mates at Tigerland and a few of them decided to head around Australia. The ultimate aim was to play a bit of footy on their travels and when they reached Darwin the four of them – Jack, Daryl Bakes, Geoff Boyle and Gary Plummer – saddled up with Waratahs.

“The heat was stifling. Our fitness had dropped off a bit whilst we were away and our first training session nearly killed us. But it was good footy and we were lucky enough to play in a flag .”

When he got back to Albury, Jack decided to get serious about his football. The first thing he did was to ‘ditch’ the grog. “I had my last beer at the age of 21”, he said

He had spent three seasons with Albury and was now in the top flight of O & M players. Keen to explore the option of coaching, he moved to Whitton, in the Riverina, as assistant-coach to Tom Doolan. It’s a tiny town, about 14 miles from Leeton, but proved a good launching-pad for him.

This led to a three-year appointment at Farrer League club, Temora, followed by two years as coach of Leeton.

“Footy in the Riverina was of a high standard in those days and people supported it to the hilt. They were memorable sporting times for me and I made lifelong friendships “, Jack says.

What’s more, he’d met and married, Sharon – a Temora girl – so things couldn’t be better. In his time up north he had represented the VCFL, South West, Riverina and Farrer Leagues, and had played seven games for NSW.

At this stage I digress, to ask him about his cricket career, which really blossomed when he was in the Riverina.

“I’d played with St.Patrick’s in Albury as a bowling all-rounder. When I started coaching I got keen on lifting weights and found that my bowling improved, too. I started to hit the ‘keeper’s gloves a bit harder and the wickets came more regularly”.

“The O’Farrell Cup is a pretty big deal up there and I played plenty of cricket”.

A look at the record books shows that Jack won selection in the NSW Country team which met the touring Pakistanis at Griffith, in 1983. Earlier in the season he’d played against the ACT at Albury.

He made an early breakthrough in the international game when he bowled ‘Paki’ opener Mudassar Nazar in his opening overs.

“I had Mohsin Khan, who went on to make a ‘ton’, dropped by the ‘keeper on 4, then little Quasim Omar popped one up just out of reach of the cover fielder. No excuses though. I could have had ‘three for’, but finished with about 1/40”.

It was Jack’s last game of cricket. He had suggested to Sharon that he wouldn’t mind having another crack at O & M footy, so they moved south. Yarrawonga, who had won the wooden-spoon the previous year, appointed him coach.

They returned to finals action, but lost a nail-biter to Myrtleford, to bow out in the Elimination Final.

He then received an approach from Wangaratta to take over their coaching position in 1985, and spent three years in the role. He played in a variety of positions – ruck-roving, mid-field, often lining up at centre half forward to exploit slow-moving key defenders.

The ‘Pies reached the finals in one of those years, but generally, Jack found it tough going. He continued on at the ‘Pies for another two years, under his successor Ray Card, and finished with 94 games in the Black and White guernsey.

Jack had started running during the off-seasons, under the auspices of that old athletics guru, Bernie Grealy, mainly to get fit for football. But, like a lot of those who take up the sport, he found it addictive.

In no time he was competing on the pro-running circuit. He won 16 or-so races, including the 800m, 200m and veterans 300m at the local Carnival – and ran in two Wangaratta Gift 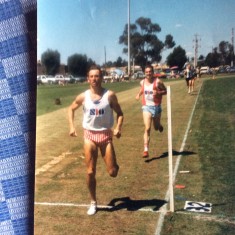 finals in a career which only finished 3 years ago, when he broke his hip.

The Murray Bushrangers snapped him up as a strength and conditioning coach in the early 2000’s. He enjoyed the half-dozen years he was there, because the kids really wanted to improve themselves.

That’s what Jack’s all about. He loves coaching, whether it be a young footballer who comes to him for advice on running technique, or a beginner with plenty of talent, but obvious flaws.

Greg O’Keeffe, who has been running alongside -and against- Jack for nigh-on 30 years, reckons h 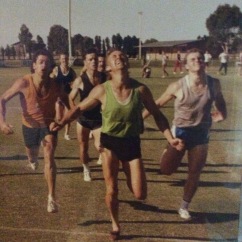 “He’ll see young kids come down to the track, analyse their style and in no time he’s pulling them aside, suggesting ways they can improve,” Greg said.

It was the same with football. He had four stints as a coach in the Ovens and King League when clubs approached him.

Somewhere in there, he also coached Junior League club Tigers for a season.

Jack’s son Sean has carved out a fine footy career with West Preston-Lakeside, where he has won 3 B & F’s and is the current club captain. His daughters Simone (King Valley) and Monique (Glenrowan) faced off against each other in this 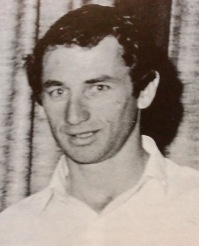 His life has been sport and if you consider the 423 games of football he played, the 17 years he coached and the 30-odd years he’s been involved in athletics, Jack Gannon has left a remarkable stamp in several spheres.

One thought on “HAVE BOOTS WILL TRAVEL”