Our street experienced its little brush with sporting infamy a few years back. It was the night a budding AFL superstar was found asleep on the back verandah, opposite our house, much to the chagrin of the occupants.

His ‘misdemenour’ was understandable, I suppose . Turns out it was the former residence of one of his old school-mates, with whom he was keen to renew acquaintances upon one of his infrequent visits home. They’d  knocked around together in his adolescent days, but he didn’t realise that, in the meantime, the family had moved to another abode.

What to do ?  You’re feeling a tad second-hand, you’re not sure what to do next , so you lie down and have a think about it. In no time you’ve ‘carked’ it. The cranky householder discovers you’re there and calls the cops……..Your name is in the headlines………..Again……….

In earlier times the young champ used to meet his mate most mornings and they’d walk to school, bouncing their footballs as they chatted ( probably concocting dreams of future sporting glory).

Call it deja’ vu if you like, but the same scenario has been played out in recent years by three kids, who went to school together at nearby West End State, then Wangaratta High.

Gerard and Daniel Sharrock and Brad Melville, who hail from further down the street, have grown up with a footy or a cricket bat in their hands.

I’ve taken a keen interest in their progress, from the time they’d have a kick in the nearby park, or knock a set of stumps in the ground and begin an impromptu game of cricket. It was, to me, a reminder of bygone days.

At their age I didn’t place too many expectations on myself. Just to move on from the Rovers to Footscray, where a brilliant footy career would be complemented by regular appearances in the Australian Test team.

That I became no more than a sporting hack certainly didn’t diminish my enthusiasm and the desire that other young kids could fulfill their dreams.

The Muntz Street boys have progressed through the ranks of junior sport. Now they stand at the precipice of exciting and fulfilling careers that lay ahead…………………

Brad and Daniel are currently in the final throes of their schooling, and are preparing for the looming Year 12 exams. Gerard, who’s a year older has shifted to Melbourne, and is undertaking a building apprenticeship. He travelled back each week-end to play with the Magpies in 2016.

Wangaratta’s senior side for the first time this season.

The Sharrocks are tall, lean and skilful and give the impression that there’s plenty of improvement in their developing frames.

Gerard made his senior debut in Round 6, against North Albury, when coach Brendan Cairns took the plunge and threw a few untried lads into an injury-riddled senior line-up.

His biggest moments in footy to that stage had been playing in Wangaratta Thirds’ successive premiership sides.

But, in particular, it was his role in the 2014 Grand Final which warmed the hearts of those who followed the Black and White. The Pies were trailing by a goal, when he took a mark, just seconds before the final siren. Lining up from 35 metres out, Gerard kicked truly, to send the g

ame into an extra 10-minute stanza.

Then, in the dying moments of extended time in this gripping contest, he swooped on a loose ball in the pocket, to snap another goal – and clinch victory for his side, by a solitary point – 11.11 to 11.10.

Daniel also figured in those premiership triumphs and was named among the Pies best in last season’s victory.

He was a member of the Murray Bushrangers squad this season, and impressed with his footy smarts and good ball-use. 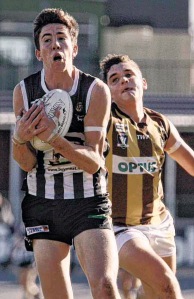 the Bushies, and he was a trifle unlucky to be squeezed out of the finals line-up, when they chose to re-inforce their mid-field set-up.

In the few games that Daniel fitted in with the Magpies, he acquitted himself more than capably.

The good judges predict that, at the least, he’ll be a very good O & M player.

Until a year or so ago, the Sharrock boys, along with their dad Craig and younger brother Lewis, played cricket in the lower grades at Wangaratta-Magpies, but they’ve since decided to concentrate on footy.

But Brad Melville is still hell-bent on pursuing his goal of a combined football-cricket career.

He’s ranked as one of the area’s hottest sporting all-rounders. 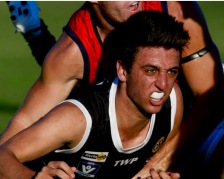 He first put his name in the football spotlight with an outstanding performance in the ‘local derby’ in 2015 – his first senior season. A slashing goal on the run from the 50-metre mark was all class, as was a second spectacular major in the final term. The umpires were suitably impressed with his efforts, and awarded him three Morris Medal votes.

Brad missed the last part of the 2015 season, as he was urged to prepare for the National U.17 Cricket titles, at which he captained the Victoria Country line-up.

He was already firmly entrenched in cricket’s ‘Elite Talent Pathway’ program, having played in the U.15 Carnival at Canberra the previous year, whilst being closely monitored by Premier club, Melbourne.

His performances to date indicate that he’s well on his way to becoming the 36th player to be elevated to Premier /District First XI cricket in the WDCA’s 123-year history.

Local legend, Barry Grant has seen plenty of Brad since he came through the ranks at Wangaratta-Magpies, and rates him highly.

“Like the Sharrocks, he gets plenty of support from his family. He reminds me a bit of Simon Hill and Chris Thewlis, the way he attacks the bowling. He’s got an excellent batting technique and is a good timer of the ball”, says ‘Baz’, whose judgement is usually spot-on.

“A classy bat, a promising off-spinner, with good leadership qualities……. He just loves playing cricket and it’s a pleasure to watch him in the field. He’s like a cat and really wants the ball to come to him.”

“He’ll probably have to make a decision, if his cricket keeps improving, whether he can combine his two sporting passions. I don’t think District clubs are too keen on blokes playing footy.”

At the moment, it’s not an issue. Brad enjoyed a terrific season with Wangaratta in 2016, and was the winner of the O & M’s Rising Star award. A hairline fracture of the jaw was his only impediment, as he became one of the key figures in the Pies’ late-season surge.

But, exams aside, cricket is his ‘go’ at present. He has played the first three one-day rounds with the Melbourne Seconds, which included a couple of tidy cameo knocks.

He’s expected to return to Wang-Magpies until the Christmas break, and is a distinct chance to play in the National U.19 titles in Adelaide. He will then more than likely throw in his lot with the Demons for the remainder of the season.

The future beckons for the Boys from Muntz Street………..