One of the quirkier characters of Benalla cricket is a rough-hewn gentleman called ‘Staff’, who operates the score-board at the Gardens Oval.

Thankfully, the Benalla players are well-used to his mannerisms and have learned to turn a deaf ear to the constant barrage of advice and encouragement that he proffers, in between arguing with those in close proximity about the accuracy of his work.

He was in full-flight yesterday, as he attempted to guide the Bushrangers home in a tense clash against Rovers-United-Bruck……

The action started early, when the Hawks – who had been sent in – lost their openers, Luke and Matt Whitten in quick succession.

The younger of the duo, who has been in fine touch of late, with three half-centuries to his name, was sent packing when he nicked one off the lively Dale Stratton. Whitten, the elder, had preceded him – also edging behind. The visitors were 2/3, and the alarm bells were ringing. Neither batsman had troubled the scorers.

Co-captains Jordan Blades and Jacob Schonafinger appeared set on retrieving the situation, but Blades became Connor Brodie’s second victim. It was 3/22 and the quicks were right on top. 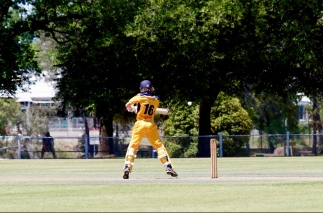 The visitors seemed to be imploding, and the loss of the reliable Schonafinger for 19 was a crushing blow. It only got worse – ‘Staff’ took great delight in bringing the scoreboard up to date after four quick wickets had tumbled – the score was 7/48…….

The two super-veterans of the side then came together in an eighth-wicket stand that brought the game to life. Lucky Perera decided on attack from the moment he reached the crease and, by so doing, wrested the initiative from the Bushrangers.

He and the dynamic Jon Hyde sent the run-rate scarping and took advantage of the fact that Benalla’s new-ball bowlers Stratton and Brodie had used up all of their eight overs.

The hosts were bemoaning the absence of a couple of their key back-ups. They relied on spinners Lee Brennan -who extracted huge turn from the track – and Ryan Lloyd-Williams, in a vain attempt to keep the rampant Hawks in check.

‘Lucky’ survived a clumsy catching attempt at backward square-leg, when he mistimed a sweep shot. It was to prove a crucial moment in the game. Shortly after, he produced a classic on-drive which sailed into the plane trees at the Rotunda-end of the ground.

Hyde, who looked scratchy early, discovered some of his rare touch, and deftly produced three boundaries in one over from Nathan Abley.

Resultantly, the Hawks had not only arrested a snail-like run-rate, but  scored with abandon. The 81-run stand between the pair came in just 49 minutes. but there were signs that ‘Lucky’s’ back injury was causing him some stress, and it came as no surprise when he holed out off Lloyd-Williams for 44.

Paddy McNamara, providing valuable support, helped Hyde reach his half-century. They added a further 39, before ‘Billy’ fell for a well-made 54.

The Hawks were satisfied with their eventual 9/174, particularly the lanky Paddy, who, with an undefeated 17, posted his highest A-Grade score.

“A handy total,” I suggested to a Benalla fan at the break. “Yeah” he replied, “but the Gardens has never been quicker. We scored 170-odd against Colts a few weeks ago and they ended with 200 in their 40 overs.”

So obviously, this was a game that was still up for grabs.

And when James Carboon and Ash Ellis set off after the target, it’s size seemed to shrink markedly. They had effortlessly cruised to 31 in just seven overs when, out of the blue, paceman Paul Szeligievicz got one through Carboon’s defences.

That was  the only encouragement the Hawks were to have for quite some time, though. The dashing left-hander Ellis was composed, and his stylish batting was a treat.
He took toll of Jon Hyde and belted four boundaries in two overs, prompting the diminutive medium-pacer to be removed from the attack.

The Hawks threw the ball to James McIntyre, who was bowling for the first time in senior ranks, and debutant left-armer Tyler Norton. Both strutted their stuff and showed promise, but were unable to make an impact.

Simon Holmes, one of Benalla’s finest batsmen of the modern era, was back in the side after missing two seasons through a serious eye injury. The stocky leftie was soon middling them and provided good support to Ellis, as the pair progressed to 87 at drinks.
88 to win, with nine wickets in hand, 20 overs to get them. It seemed an impregnable position for the home team.

But the game swung on its ear in a trice.

McNamara, the enthusiastic left-armer, had proved the most economical of the bowlers, conceding just 11 runs in his first 4 overs, but he struck a telling blow when he skittled classy Ellis for 59.

Wicket-keeper-turned off-spinner Lucky Perera Made further inroads when he had Holmes caught for 19, and five balls later dismissed Lee Brennan for a duck.

McNamara, who was now in full cry, captured two more wickets in his next over. The Bushies had now lost 5 wickets for two runs.

But again, it was Benalla’s turn to mount a rearguard action. Nathan Abley and Josh McCullum proceeded to steady things, then set a cracking pace, as they added 60 for the seventh-wicket.

The game was now theirs to lose.

They needed just 21 runs; still had four wickets in hand.

In a make-or-break move, the ball was again thrown to part-timer Perera. It was felt that the game may be decided on what happened next.

Again Lucky did the trick. Abley, on 38, slammed one back and was dismissed caught and bowled; a brilliant reflex catch.

Then McCullum fell with no addition to the score – out for 22.

Benalla had lost 3 for 1. Their two batting ‘hiccups’ had amounted to the loss of eight wickets for three runs.

Just 14 runs short of their target, and still not without a chance, Connor Brodie hoiked a shot into the deep, giving Jordan Blades a short run to complete the catch and effect a memorable victory for the Hawks.

McNamara, one of the team’s five ‘babies’ sent down 6.4 overs to finish with the figures of 4/16 and continue his improvement. Perera snagged 3/17 off his 4 overs. 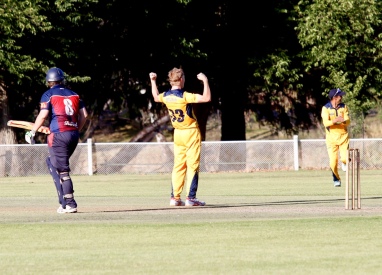 With youngsters Matt Whitten, McNamara and Bailey Dale all enjoying fine seasons, and Bailey Annett, Jimmy McIntyre and Tyler Norton sure to continue their improvement,  the smiles  are back on the faces of the Hawk clan………..

N.B: With thanks to Peter Whitten for Photography.