The prized Number 16 locker at the Wangaratta Rovers Football Club belonged to just two players over a 32-year period. The first of these was the inimitable Mervyn ‘Farmer’ Holmes, who held sway in defence for 302 games.

Upon his retirement in 1986 a slightly-built 17 year-old asked if he could have the privilege of taking over the number.

For the next 17 years Mick Wilson played with fearsome determination. He ran harder and tackled and harassed more ferociously than anyone, and after 316 senior games, earned the universal acclaim of country football folk when his playing career drew to a close in 2004. 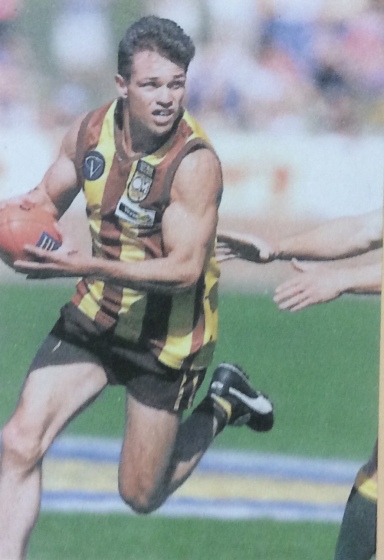 In an era when loyalty in footy was treated contemptuously, he led by example as the consummate team-mate.

The three Wilson kids – Mick, Joe and ‘Waldo’ – were just whippersnappers when they wandered down Nolan Lane, Tarrawingee, to train with the Bulldogs’ newly-formed Thirds team.

“I think I was about 11, and the coach, Des Griffin used to let us join in. Then, on Sundays we’d head across to play with the Whorouly Midgets,” says Mick.

“I always thought it would’ve been more convenient to go into Wang and play in their Midget comp, but Chas (Dad) joked that there was less chance of him being pulled over by a breathalyser this way. And besides, he said, there were three pub stops on the way home – at Whorouly, Milawa and, of course, Tarra’s Plough Inn.”

His parents, Chas and Toni, are legendary figures in local sport.

“Chas, in particular, had some off-beat philosophies,” Mick recalls. “For instance, after a good rain, he’d gather a heap of snails; weigh them, number them and put them in an old microwave one by one, to see how long it took them to explode. He was trying to justify some mathematical formula that he was working on.”

But Chas and Toni couldn’t have been more rapt when their offspring began to show signs of obvious potential.

Mick had been filling in with Tarra Thirds, on and off, for a few years. He went in one day to watch his uncle, Paul Nolan, strutting his stuff in a practice match with the Rovers Thirds. They were short, and he was pressed into action.

Later in the year, he was slotted in for a couple of games on permit at the urging of coach Darryl Smith; held his spot for the finals, and played in a Premiership side.

He was 16 when he had his first full season with the Thirds, and showed enough to attract the attention of new Hawk senior coach, Laurie Burt.

“Laurie picked 10 debutants for the opening round of 1987, and most of us had come up through the Thirds. It was the dawn of a new era for the Club,” Mick says.

“Laurie was 10-15 years older than most of us. He had the complete respect of everyone, and was still playing great footy. He cared about us as people. Although he was super-professional, he could have a bit of fun, too.”

The Rovers were dubbed ‘Burt’s Babes’. They strung together a succession of wins, which ultimately swept them into the 1988 Grand Final. Their opponents, the star-studded and vastly more experienced Lavington, were expected to have too many guns for them in the Big One.

“I remember my opponent grabbing me in a headlock and throwing me to the ground early in the first quarter,” Mick says. ” I looked upfield and there were ‘spot-fires’ raging everywhere.”

“It was obviously a plot by Lavi to put the pressure on us. But we proved a bit quicker; a bit more skilful. After the game, when we went up to receive our medals, I overheard some fellah say: ‘ I can’t believe how young these blokes are’.” 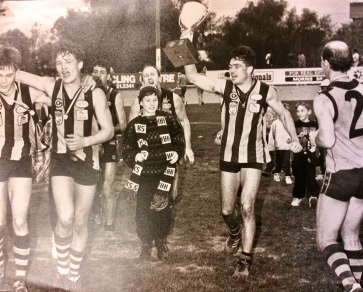 It was a famous Hawk victory, but the one that gave Mick special satisfaction came three years later, when they belted Yarrawonga: “Joe was in the ‘88 side, but ‘91 was ‘Waldo’s’ first flag. It was a real thrill to share it with them.”

“Yarra had beaten us in the second-semi, and they were really fired up when we met them a fortnight later, at the Showgrounds. They targeted Anthony Pasquali and Peter Tossol for some reason. Big Brett Jukowicz’s eyes were rolling around in his head. He went right off. But I think we won by something like 12 goals.”

Mick was to become synonymous with inter-league football, after making his debut in 1990. The challenge of lifting to a higher standard always brought out the best in him. He was to represent the league on 23 occasions (6 times as captain) – and play at two Australian Country Carnivals.

An example of his fabled durability came when he hobbled off during a clash against the Latrobe Valley, at Traralgon. Two days later, the Rovers were due to meet Myrtleford. He got home, set his alarm, and iced his dicey ankle every two hours in order to be right to line up against the Saints.

Probably the highlight of his representative career came in 1994, when the Wilson trio were selected to wear the Black and Gold O & M guernsey at Sunbury.

This was during a period when the Rovers had assembled one of the greatest of all O & M sides.

They chalked up 36 wins on end and were rated near-invincible. At the height of it, they took out the ‘93 and ‘94 premierships and their reign was showing no signs of stalling.

“It seems strange to say,” says Mick,”……but during that winning era, it started to become a bit boring. You had to really psyche yourself up some weeks.”

“But when I looked back in the late nineties, I came to realise how hard flags are to win. In some of the ones we missed out on, we were close to – or as good as – the sides that won them.”

“In those ‘nearly’ years, the connection mightn’t have been as strong off the field as it could have been. The odd blokes might have been playing for themselves, maybe worried about their positions, or form, or whatever…….”

“There was a high correlation, with the teams that won flags, where we really gelled as a group.”

The lasting memory of Mick Wilson is of him setting off downfield from the half back line, and launching the ball deep into attack – or throwing himself into a pack with courage. His fitness was famous and he trained with rare intensity.

“When we had those great sides, there were some ding-dong battles on the track. We liked to set the standard for the younger blokes at training,” he says.

He still played an important role in the Hawks’ most recent Grand Final appearance – in 2002, but two seasons later, realised that Father Time had caught up with the body that he had punished year after year. 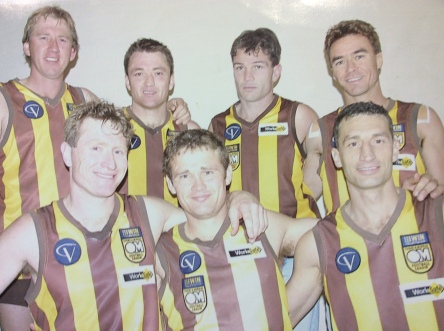 “It was the opening game of the season, and someone from Corowa-Rutherglen was tagging me in the Seconds. He was giving me a hard time, and I couldn’t be bothered retaliating. I knew it was time to give it away.”

“I could’ve gone back to Tarra, but instead, kept training and did the running for ‘Toss’, who was coaching. I just didn’t play again.”

“They were probably expecting me to be really strict, but on one of the first training nights I produced a couple of slabs after training. We tried to prioritise things like the players keeping the rooms clean, always thanking the volunteers, and making the netballers inclusive.”

“I had good support on the footy side of things; that part of it was really easy, and the club was well set up off-field.”

The Dogs broke an 18-year premiership drought when they overcame a persistent Bright in the 2008 Grand Final. They were hot favourites the following season, having won 39 games on the trot.

But Milawa got the jump early and held on to win a thriller.

The 2010 decider was also a nail-biter. In a game that went down to the wire, Tarra got up by two points in one of the greatest of all O & K Grand Finals.

With that, Mick Wilson decided to walk away from coaching,

He had already become somewhat of a sporting icon at Tarra, having captained five of their cricket premiership teams over 20 years, but old Dogs, who had become used to years of heartache appreciated his role in returning the Club to the upper echelon……..

Mick is now involved in his ‘dream job’ as Talent Identification Manager of the Murray Bushrangers. In this role he’s charged with the responsibility of uncovering the cream of the region’s young football talent, and giving them the opportunity to impress the nation’s recruiting scouts.

The Wilson kids, Brylee, Kelsie and Darcy are showing plenty of promise in football, Netball, cricket and athletics, and appear to have been endowed with a healthy dose of the family’s renowned sporting genes……… 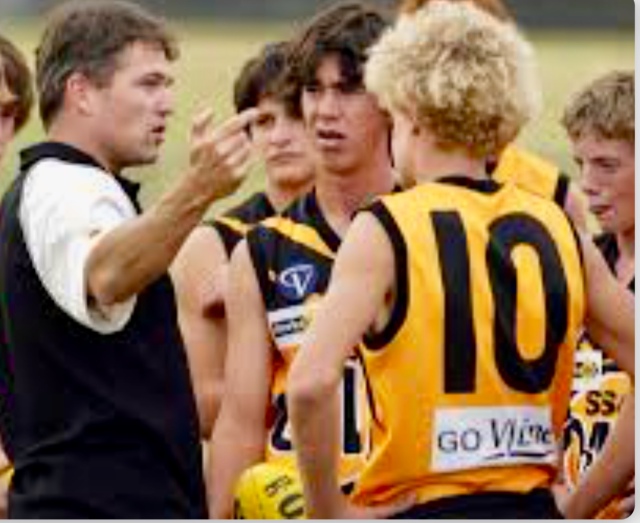