Early October in Darwin. It’s hot, but not unbearable. The locals inform you, with a knowing smile, that the ‘Build-Up’ is coming.

The monsoonal ‘Wet Season’ storms that spectacularly light up the sky and send the vegetation into an explosion of color and vivacity, will be accompanied by a sweltering and uncomfortable humidity.

The footy season starts this week and the usual collection of ‘southerners’ have made their way to the Territory capital to top-up each of the eight teams. They will be of varying types, quality and character. Some will be back home by Christmas, either because of the heat, homesickness or because they’ve underestimated the standard of footy. In other words – they haven’t been able to get a kick.

I made the northern football pilgrimage in 1971.

Cutting myself free from the umbilical cord of the Rovers, to which I had been attached since birth, was painful, but ahead lay the prospect of broadening my horizons.

There were no pretensions that I was about to ignite some latent football ability. I was a scrubber.

A short piece, recently written by a fellow battler, Jarod Newton, about his own travails, summed me up to a tee:

……”Every footy club has at least one. He’s never going to tear a game apart, yet he’s at the heart of footy and footy clubs. He is the battler. He’s the bloke who comes off the bench for short bursts, the bloke who is the scapegoat for supporters. He frustrates his coach. He runs the water when he’s injured, sells his raffle tickets and never misses training. When he’s omitted from the side, as he will be every season at some point, he takes the knock, admits his failings and swears he’ll stand up in the reserves to put himself back into contention.”……….

So I packed up the old grey and white EK Holden and ventured forth. The first port-of-call was Brisbane.

Having little driving experience outside Wang I found bang in the middle of a traffic jam in the city, on arrival, on a busy Friday afternoon. I panicked, the EK stalled, a cacophony of tooting horns from exasperated drivers heightened my predicament.

There was a contact at one of the old, traditional QAFL clubs, Coorparoo so, in a trice I became a Navy Blue and could, in latteryears, boast that Jason Dunstall and I both occupied the goal-square at Giffin Oval.

Most of you have vivid memories of the great games you have played over your careers, but I’d like to tell you about the only day I felt that I ever elevated my performance to another plateau. Unfortunately, it was a mere practice match, held in front of a handful of onlookers.

I experienced the sensation of flying gracefully through the air for marks, clunking them with authority, then swivelling in mid-air and shooting bullet-like Polly Farmer-style handballs to team-mates many metres away. The Sherrin, on this memorable occasion, seemed to be under my spell.

Aha, I privately marvelled. Inside this slovenly body is encased a superstar. But alas, despite initially causing club officials’ hearts to flutter, this proved something of a mirage.

It was a great experience with the ‘Roos. Our form tapered and we eventually missed the finals, but this was soon forgotten amidst the anticipation of a four-day trek across the nation.

What a relief to arrive in Darwin and stretch the legs at last. Alighting from the dusty red Monaro to which I had now upgraded, an incredible wave of heat forced me to rush to the comfort of the nearest air-conditioned bar.

Four hours later, after renewing acquaintances with an old mate, Frank Griffin, I was introduced to a new set of team-mates at training. Knowing ‘Griffo’ from old, I knew that he would have given the Nightcliff boys an inflated description of my limited ability.

In the fading light of that first session, they appeared to be a combination of black, brown, brindle and white and the darker it got the more sinister they looked.

But they were a terrific lot of blokes. The first piece of advice I received was to keep the fluids up and remember: “up here beer is medicinal”!

Nightcliff had won three flags in their brief history and were originally known as Works & Housing. The club’s roots were heavily steeped in the Public Works sector.

So they found, or gifted, me a job as a ‘Scaffolder’. Hell, I had no idea even what a scaffolder was, let alone operate as one.”Don’t worry”, they said. “All you’ve gotta do is get the boys lunch, morning and afternoon tea and clean up a bit after them”.

Nightcliff (The Tigers ), boasted some of the NTFL’s stars among their ranks. Probably their smoothest mover was Kenny Bonson, a Nicholls Medallist and former coach.

The Bonsons were famous in Darwin footy, as were many other families, like the Lew Fatts, Motlops, Coopers, Ah Matts, Roes, Muirs, Tyes, Stokes’ and Longs.

The up-and-coming star of the side was a teen-aged rover called Joe Daby, who was to become a 5-time club B & F and dual Nicholls Medallist. His side-kick was a tiny bundle of energy called Greg ‘Muscles’ Adams.

Wayne Radbone, an ex-Sturt player, had taken on the coaching job and in mid-season Keith Pattinson, a SANFL star arrived. Among the southern influx was a red-headed former Carlton Reserves player, John Kemp, who achieved some sort of fame within the club by sleeping in his car throughout the season.

The Tigers trained at their home, Nightcliff Oval, but most games were played at the historic Gardens Oval.

We were a middle-of-the-road side, being no match for Darwin, who were chasing something like their fourth flag in a row. But we managed to scramble into the First Semi-final against St. Mary’s.

In a bruising encounter, which culminated in an all-in brawl in the last quarter, the Saints proved too strong and ran away to win by 20 points.

“…..There were more cautions handed out in 10 minutes in this game than by a referee in a tag – wrestling match…….”, the NT News proclaimed.

My sayonara to the NTFL came the following Tuesday evening. Summonsed to the Old Darwin Court House, the tribunal meted out a two-week sentence for striking a feisty Saint whose name has always stayed in my mind – Leon Puruntatameri.

There was plenty of time to ponder my misfortune. The next day the Monaro cruised onto the Stuart Highway and I tentatively began to negotiate the 4,000km journey home. The Northern Safari was over……… 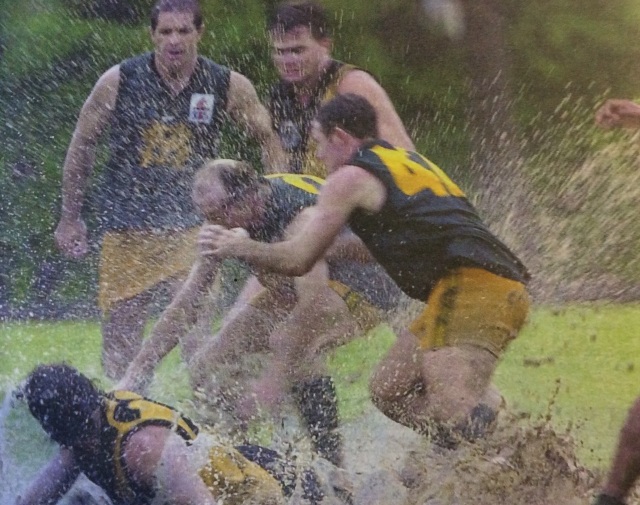