Jack Ferguson was a five-time premiership player and Wangaratta’s champion full back, in a career spanning fifteen years.

When he retired, he was coaxed behind the microphone, to become the voice of 3NE’s football coverage. He was a natural and had the knack of effectively transmitting the excitement of the game to his audience.

He was known universally as ‘Rinso’. The derivation came from his christian name, which was watered down by his school-mates from Terrence, to ‘Rince’. They finally settled on ‘Rinso’.
His dad, Terry, was a member of a famous football family, which shared in Moyhu’s success during its ‘Golden’ era of the late 1920’s – early 30’s. He was joined in the side by ‘Poss’ ( Percy), ‘Skin’ (Alan), ‘Binnie’ ( Bernie), ‘Spot’ ( Ted), Jack and a cousin, Eric.

After they had saluted in 1929, they laid claim to be the best team in the North-East, by defeating O & M sides Wangaratta and Benalla in successive weeks.

‘Skin’ Johnston headed to Melbourne to have a run with Fitzroy and at various times the other boys drifted down to try their luck in higher grades of football – and to escape the depression woes of the bush. Eventually their mum followed , probably to keep an eye on them, only to see them all head back to their roots.

‘Rinso’ was an outstanding talent as a youngster. The most difficult task he faced was to keep his mind on the job. He had a reputation for being able to jump his own height and usually cleaned up at the popular sports meets around the area.

Built like a goal-post, he was 15 when  named as 19th man for Moyhu’s senior side.
His sister Janice had just finished knitting him a new Green and Gold Guernsey and there was huge excitement in the family, as he prepared to follow in his dad’s footsteps.

But he found it hard to contain the tears on the day of his debut when one of the selectors had a quiet word to him and asked if he’d mind standing aside:

“Look, Terry, there’s a new school-teacher at Carboor and the ‘mail’ is that he’s a bit of a ‘gun’. We thought we’d give him a go in your place”, were the words, delivered with the subtlety of a sledge-hammer.

Inevitably, his replacement proved to be a ‘dud’ and ‘Rinso’ was back in the side next week – this time for good.

Wangaratta lured him and one of his Moyhu team-mates in for the practice matches of 1954. He impressed the good judges sufficiently and was regarded as a ‘cert’ for the opening round.

He was given the ‘heads-up’ by Mac Holten. “Now, are you okay for a ride in, Terry, ” the coaching legend asked. “Yair, Jack’ll bring me in”, said ‘Rinso’.

“Oh, we don’t think he’s good enough to make it”, was the reply. So the new recruit had to make some hasty travel arrangements.

He consolidated his senior spot and proved adept at either end of the ground. At 6 foot 2 and a half and 12 stone 2 lbs ( dripping wet ) he was agile, a beautiful kick, and could handle the star forwards of the day, like Lester Yensch, Frank Seymour, Leon Pain and Frank ‘Dolly’ Aked.

Aked, the former Footscray star with the awkward kicking style and big reputation, was kept goalless in one of his early O & M games at Yarrawonga, as ‘Rinso’ climbed all over him in the air and mopped up effectively at ground level.

Just as the fans these days rave over Melbourne high-flier Jeremy Howe’s acrobatics, so it was with ‘Rinso’ who had the propensity to pull down a couple of ‘skyscrapers’ a game.

He could be swung to full forward with telling results, but it was as a full back that he made his debut in an Ovens and Murray guernsey at Bendigo in 1956.

He received approaches from Essendon in 1955 and from Geelong in three successive seasons, but preferred the country lifestyle.

Boisterous, fun-loving, easy-going and with a keen appetite for the social life, he embraced the off-field activities at Wangaratta with gusto.

He inherited the Johnston family fondness for the ‘punt’ and a cool ale on a warm day.

In fact he was the life of the dressing-rooms.

The arrival of a 19 year-old recruit from Tyntynder mid-way through the 1956 season led to a liaison of kindred spirits.

Stories of the exploits of ‘Rinso and K.Mack’ have seemed to grow legs as the decades have passed.

The Magpies were a top side through the late 50’s and early 60’s.

They plumped for a St.Kilda forward, Jack McDonald, to succeed Mac Holten in 1957. It was a last-minute appointment, but proved a master-stroke, as they stormed to the Grand Final against Albury. In a classic contest, they clinched the flag in the dying seconds of the game, thanks to a Lance Oswald snapshot.

It was ‘Rinso’s’ first flag and was celebrated accordingly.

The second came in 1961 and was much less stressful for Magpie fans. It was a slaughter, as Wang exploited Benalla in the air and out-paced them to run out winners by 63 points.

The now-veteran full back had benefited from the arrival of Lenny Richards, a nuggety back pocket player who read the game well. They synchronised superbly and it gave ‘Rinso’ the freedom to back his judgement.

He headed out to Greta as playing-coach in 1962 but struggled in the role and his form suffered. Greta finished second on the ladder and were probably unlucky to lose a tight Preliminary Final by four points.

‘Rinso’ decided that the coaching caper wasn’t for him and returned to Wang the following season. He retired in 1964 , with 150-odd games under his belt, a Life Membership and a reputation as one of the Pies’ most colorful and versatile players.

He remained a staunch, one-eyed Magpie and outwardly professed his intense dislike of the Rovers.

But deep inside, he would have been chuffed that some of his grandsons and daughters had come through the football and netball ranks with the Hawks.

And doubly proud when Karl Norman, long, lean and talented, and  possessive  of a physique which reminded old-timers of his grand-father, played VFL football and later, established himself as an O & M star.

‘Rinso’, who passed away this week, was one of Wangaratta’s true sporting characters. 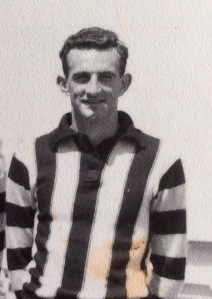 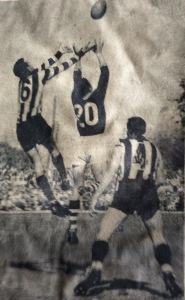