It may conjure images, to those of an earlier vintage, of a sturdy defender, with abundant traits of determination and discipline and the ability to clamp down on dangerous opposition forwards……..

Many will recall a lean, smooth-moving left-footer, able to be used, with equal effect, in defence or attack. They’ll hark back to the the injuries, which played havoc with his career – but not before he had made a sizeable impact on the game.

Still fresh in most people’s minds is the vision of a brilliant, creative on-baller, capable of swinging a match with his scintillating ball skills. Many rank him among the greats of O & M football.

Then there are his two siblings – less talented by comparison, but blessed with the knack of fine disposal, who carried the additional pseudonyms of ‘Turtle’ and ‘Apples’.

However, there is more to this footballing dynasty – which spans  80 years – than just on-field achievements and a nickname that has stuck like glue……….

John William McCormick ( ‘Hop’ sounds more appropriate) turns 92 next month. He’s a tad proppy these days and thankful for the ‘Walker’ that helps him to manoeuvre around.

But there’s no doubting his memory. He’s as sharp as a tack and I’m sure no-one’s able to bring bygone eras to life the way Hop can.

He credits his old man, Dave, for fostering his love of the game.

“Dad couldn’t kick over a jam tin, but by gee he loved his footy. He was one of a handful of people, along with Peter Prest, Bill Heffernan and Aub Jackel, who were responsible for forming the Wang Junior League in 1938.”

Hop wasn’t really old enough to play, but managed to squeeze in a few games the next season, when the South Wanderers were short.

War was declared, the juniors went into recess, and the only way youngsters like him could get their footy fix for a couple of years, was to train with the Wangaratta team, which was competing in the Murray Valley Patriotic Association.

He then served in the Air Force for 16 months ( “I helped win the war at Essendon ! “) and, on his return home, joined a newly-formed team – the Rovers – who had been admitted to the Ovens and King League.

I tell him I’m tickled by that unlikely correlation – ‘Hop’ McCormick and the Rovers. But he assures me it was only for one season, after which he moved on to fulfill his dream – of playing with Wangaratta’s O & M club, the Magpies.

He was about to become part of football legend.

Tom Tribe, the ex-Footscray star, had been the mentor in his first two seasons. His successor, a respected Collingwood forward, Mac Holten, initiated a training regime which moulded the Pies into the fittest and best-drilled team in the competition.

“Holten completely changed the coaching dynamic by getting us to play a flow-on game. He was a great coach,” Hop says.

Wang swept to four successive flags – 1949 to ’52 – with an array of talent which compares to anything ever assembled in O & M football. The dour McCormick formed part of a water-tight defence, led by the pillars, Lionel Wallace and Jack Ferguson.

He became King Valley’s first paid coach in 1953 and despite little on-field success, reckons the four years he spent in the hills were among the most enjoyable of his football career.

“Lorna and I had a great time, and made many life-long friends.”

Hop was rising 31 when he returned to the Magpies in 1957;  unsure if he still had it in him to command a regular senior place. There was no cause for concern. He slotted back into a strong defence and played his part in a heart-stopping Grand Final victory over Albury – his fifth flag in 7 seasons of O & M football.

The rivalry between the two Wangaratta clubs was at its most intense during the 50’s. One story, which has filtered down through the years illustrates how passions were on a knife’s edge in the ‘local derby’:

Hop was given the task of shutting down one of the Rovers stars, in a match which had already produced its share of fireworks. Suddenly, he reeled from a pack ; a ‘blue’ started ; he was worse for wear, but Dr.Howard Marks finally revived him with a whiff of smelling salts.

His dad, a dead-keen supporter, took exception to Hop’s treatment and became involved in a heated argument with some vocal Hawks ; the result being that there were spot-fires raging on both sides of the fence.

“I’m not sure who collected me – it was either Bob Rose or Ray Burns. But Rosey came around to see me a day or so later, to enquire about my health. We ended up becoming good mates.”

Hop played two more years in the seniors, then spent the 1960 season helping out the Reserves, before finally hanging up his boots. He had played 183 senior games.

Time to rest on his laurels ? ……Not likely.

After two years on the Wang committee, he accepted the position of Junior League secretary, a role he performed for the next 18 years.

In the mid-sixties, he and Norm Minns recognised that kids who were not old enough to play in the Junior League weren’t getting the opportunity to play any organised football.

They initiated the Midgets competition.

“We advertised a couple of training sessions. 150 kids turned up on the first day. But they wanted to play fair-dinkum matches. So eventually we had under 15’s,13’s,11’s and 9’s. Every available oval was used on a Saturday morning. Another off-shoot of this was the Mini-Midgets, for the little tackers.”

Hop was the President of the Midget comp ( as well as Junior League secretary) and called in on each of the matches, ensuring that balls, umpires, guernseys and helpers were all spot-on. He would leave home at 7am, principally to ensure that all of the grounds were okay.

By now, his son Ian had made his way through the ranks, and into the Wangaratta senior side. A noted team player, he made over 120 appearances in the Black and White guernsey during the seventies.

His highlight, naturally, was playing on that memorable day in 1976, when the Pies ran away from the Rovers to record a famous Grand Final victory.

Ian chalked up two more flags with Milawa during the early ’80’s. But the sum total of his injuries ( three knee reco’s, a broken jaw and a dislocated shoulder) cut short his time in the game. 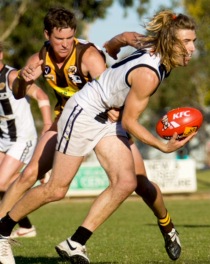 Wise judges had been spruiking the talents of Jon McCormick long before he took out the WJFL’s McCormick Medal – named after his grand-father – in 1997. The lad with the long, flowing, blonde locks, could pick up kicks at will and the only knock on his prospects of becoming an AFL player appeared to be his slight frame.

He did play 26 games with Carlton, after being released from North Melbourne. Many felt that he was judged harshly because of his size, and deserved more opportunities with the Blues. 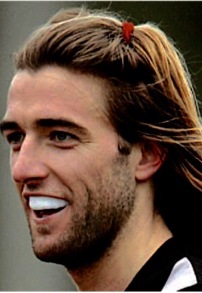 But on his return to Wangaratta, he took the O & M by storm. He won the 2007 Morris Medal and, but for injury, could have won another.

He was a champ, a dual club B & F ( McCormick Medallist), and a contributing factor in the Magpies’ flags of 2007 and ’08, but his second knee reconstruction in 2009 put the kybosh on a glittering career.

Jon’s sporting juices are currently sated by chasing waves at Philip Island, where he now resides.

His brother Ben, a steady player, and a beautiful left-foot kick, also played with Wangaratta, as did Dan, who has been at Tarrawingee for the last few years.

He’ll be one of the Bulldogs’ key players, as they attempt to maintain their early-season form and chase their eighth O & K flag this season.

‘Old Hop’ – VCFL, WJFL and Wangaratta Life Member, Magpie Team of the Century back flanker, former O & M Tribunal member, former O&K Investigations Officer and extraordinary football servant, hopes he’ll  be there in the role that he loves ………. urging on the young fellah. 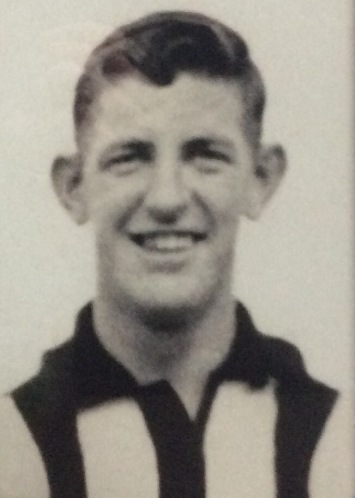